Most projects have dependencies on other libraries, the problem is that they need to be refreshed to fix bugs, security issues and take advantage of new features. In this post we will look at different ways to keep up to date with the changes and updates to our dependencies for both humans and systems.

All the examples will be illustrated using AG Grid, so this post can also be used as a reference to keeping up to date with AG Grid.

Why Keep Libraries Up To Date?

By keeping your libraries up to date you can:

Why Not Keep Libraries Up To Date?

It is possible for new versions of libraries to contain breaking changes, or to introduce new bugs.

Your development timescales may not have sufficient time for you to change your code to handle the changes, or perform enough testing to convince you that the new version has not impacted your code in some way.

The risk profile that you choose to adopt for versioning can be aided through the use of semantic versioning in your dependency files. For example you might decide to accept only patch versions, or not update major version number but allow minor releases. We describe how to do this later using examples with npm.

Keeping Humans Up To Date

It is possible to automate many of the update processes for the software, but we might decide to first keep humans up to date so they can make decisions about when to update the software.

These are the ways I usually keep track of software and libraries:

I don’t always do all of these for every tool and library I’m interested in, it depends on the tool, how they do their marketing and the type of content they put out.

If I’m using the library for development then I’ll typically watch the Githhub repo for version changes, follow them on at least one social platform, join the newsletter, subscribe to the blog rss feed, and check the release notes when there are major releases. And I do subscribe to a lot of channels on YouTube. So… actually that’s most of them covered.

Of course, we’d love it if you did as many of these as possible with AG Grid… and encourage your friends to do so as well :)

Many open source tools do not have newsletters, and you’ll end up relying on social media, blog monitoring or Github monitoring.

Tooling newsletters have pretty low sending rates so you might only receive an email for major releases or minor releases.

For AG Grid, we send out a mailing for every major release, and recently for minor releases as well. But not patch releases. Once signed up you can adjust your mailing list preferences to receive the newsletter (which contains additional links to blog posts and event notifications like podcasts), or simpler release announcements which just provide information about the releases.

Add the blog rss feed to a news reader

Most sites have a blog, and most blogs have an RSS feed.

It may not always be obvious what the URL to the RSS feed is, but if you look in the headers of the page you’ll usually see an alternate link e.g.:

In addition, we need a tool that will read RSS feeds.

I personally use NewsBlur.

Some of the other techniques I’ll point out below, also use RSS feeds e.g. I subscribe to Github repo updates, and YouTube channels via RSS.

The AG Grid blog usually has a blog post covering major releases, and recently we’ve been creating posts for minor releases. We also release How To and Tutorial posts.

One useful side-effect of following tools on social media is the ‘social proof’ that it provides for the tool. The more people that follow the tool, the more likely people are to consider the tool worth using.

Tooling social media feeds are not usually as active as a personal feed, and they will mainly be concerned with: releases, hints and tips, and tutorials.

Most of the AG Grid posts fall into the above categories.

Check their release notes and pipeline

Hopefully every tool creates release notes for each new release. These might not always be obvious on the main web-site. Instead you might find the release notes on Github.

For AG Grid we maintain a Change Log, for every release so you can see what was added in the various releases.

When the release contains breaking changes we also include notes about deprecated methods, or changes to the API.

And if you are interested in what is coming next, we also maintain a pipeline of up and coming features.

Starring the Github Repo is usually more beneficial for the tool, than it is for the user in keeping up to date.

All tools want you to Star their repo, we would love you to Star our Github repo. We even moved to a mono-repo to make it easier, now you only really have one repo to keep an eye on.

Starring a repo means that it shows up in your list of starred repos:

e.g. Here are the repos that I have starred

This can provide a list of shortcuts for repos that you have shown some interest in, but may even have forgotten about. It also makes it easier to manually visit the repos to check for updates

Starring is more important for the tool than it is for you because there are ‘trending’ sites which report on repos with the most stars.

For example the ‘trending’ page on Github is based on ‘stars’:

You can also Star people, again this just adds them to the list of starred items.

I tend to benefit more when I ‘follow’ contributors, and ‘watch’ repos but I 'star' repos because of the benefits that it adds to the project.

If you want ‘stars’ to do more work for you then the 3rd party service Banditore will create a custom RSS for releases of repositories that you have starred.

This is a ‘vanity’ metric that actually adds value to the user.

A ‘vanity’ metric in the sense that Github reports how many followers an account has and this can confer bragging rights to the account.

But it also allows you to receive notifications about that person. On the Github news notification page I see what they’ve been working on, if they have created any new repos, or any new releases.

Watching a repo is the ‘follow’ mechanism at a repository level.

We can control the granularity of the notifications by using the 'custom' watch level. 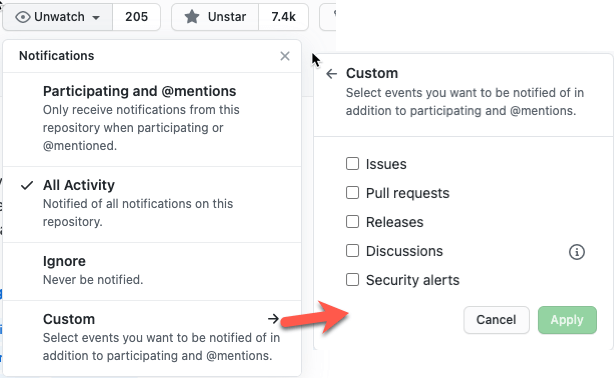 As soon as you start Watching repositories, take a moment to configure the Notifications on Github to control if you receive notification via email, or on via app notificatons.

Use the Github releases rss feed

Each page on Github as an alternate link for an RSS feed.

Releases is the only RSS feed I tend to add to my news reader.

Most tools or influencers will have a YouTube channel. We release tutorial videos and how tos on our channel.

This is easy enough when the channel has not added a human readable id. If the channel has customised their URL then you can either hunt through the page source code to find the ID, I usually find the ID by looking at the canonical url.

The channel ID for AG Grid is UCerp9sZdHwofLTW8zG6Sxtw

So the RSS feed for our YouTube Channel is:

Keeping Software Up To Date

This will add the AG Grid library to my package.json file.

The current version of the library from npm has been added as a dependency.

This is a way of defining a specific range of versions based on semantic versioning.

What is Semantic Versioning?

Semantic versioning means that the version number is written in a specific format: MAJOR.MINOR.MATCH

Most libraries try to keep to this set of definitions.

You can find more information about Semantic Versioning in the semver.org specification.

My npm install command added “^25.1.0”, to my package.json, this means that I will accept any version within the major version of 25 which is greater than equal to 25.1.0, which would include:

But it would exclude versions below 25.1.0

The SemVer Calculator on the npm site is very useful for constructing a semver string to add to package.json because you can test it out to see what versions would be matched by the string.

npm has a variety of commands which can help work with library versions.

npm list will show you the version of the package that you have installed.

npm outdated will show a list of outdated packages in the command line output.

npm update will install the most up to date version, based on the semver in package.json but will not update the package.json file.

You would have to review the output in the command line and make the changes yourself to make the updated version the minimum acceptable version defined in the package.json.

We could also specify a specific package version for install to use, again this would ignore the semver definition in the package.json

As previously mentioned using @latest should return the most recent version.

Command line tools exist which can help automate this process to prevent typos, or even typing at all.

Other tools exist, but I’ve only personally used npm-check.

The most obvious risk of automatic updates is that you lose control over the project.

Your build might start failing, because a dependency has updated in the background and included breaking changes, or fixed defects which have had a side-effect on your code.

There is also the risk that an update might change multiple libraries at the same time making detection of the cause of any errors harder.

If you are unaware that an update has taken place then you might spend time debugging your code when the faster solutio is to roll back the update.

If the library is truly adopting the semantic versioning definitions then, by controlling the version configuration in your package.json you reduce the risk on your project.

Staying up to date with versions is as important for humans as it is for systems.

As developers we are often used to relying on dependency management systems to keep us up to date. Using semantic versioning is important to reduce the risk of unexpected breaking changes.

Equally important is knowing where to find the information about the updates, so that we can deliberately update the library versions to take advantage of new features that can help us deliver more value to our users. 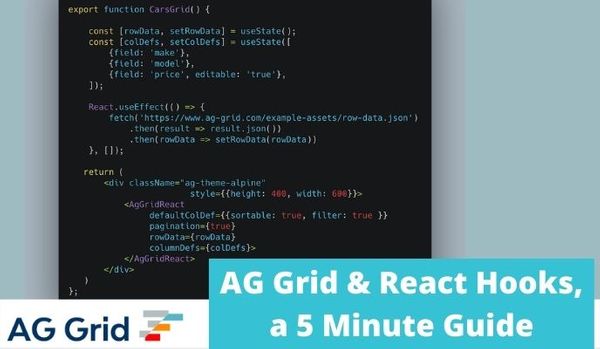 In this post we will cover Getting Started using Hooks and how to optimise components which use the React Data Grid. 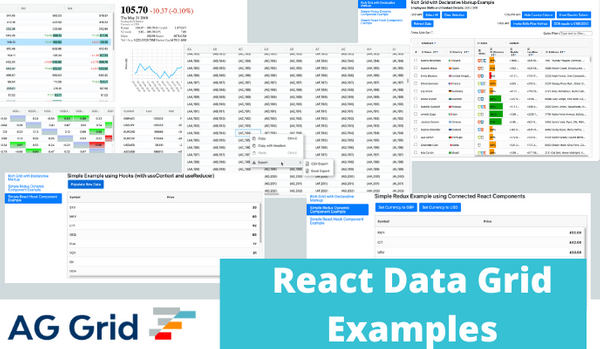 This post will provide a quick overview of the React Data Grid example repo with some suggested exercises to act as introductions for developing using AG Grid.