See the live sample in action below - expand different columns and note they have different detail content:

You can see the code in the StackBlitz above and also download the Github repo for this project here.

We'll implement this scenario in 3 steps as shown in the contents below:

In order to display different detail-level renderers depending on the master-level column the user expanded we use a detail renderer factory.

We add a separate expansion button in each master-level column to expand a different detail-level content panel. We keep track of the column the user expanded in the context object provided by the grid whenever we expand a row. This way, based on the master-level column the user expanded, we return different detail-level content.

Please see this class implemented in the code below and note:

Now that we have three different detail-level grids displayed when we expand different columns, we need expansion buttons to expand and collapse them in the master-level columns.

This is why we need a custom expansion button to keep the expansion state separately on a column-level instead of on the row-level. We'll build a custom cell renderer for the master-level columns to implement this.

See the custom (parameterized) cell renderer for the master-level columns implementation in the code segment below. Note the following:

1) In the custom cell renderer, we have the cell value shown in a span element, and an expansion button (chevron) image in SVG format taken from the AG Grid Alpine theme to toggle the expanded state of its detail renderer

See this implemented below:

Our cell renderer needs to save the expanded state of its expansion button because the grid uses row virtualization and destroys and recreates rows when they're scrolled out of view, taking their cell renderers with them. When the cell renderers are recreated they show their default state which is desynchronized from the actual state.

The code to save and restore expanded state is shown below. Please note:

2) We save expansion button state in a map in the context object provided by the grid. Each time a cell renderer is created we check if it was open before and if it was we restore its expanded state from the map.

Now, when we create our cell renderers with expansion buttons for a master-level row, we can restore the correct expansion state for the columns based on whether it was expanded before it was scrolled out of view.

The above sections show you how to implement displaying different content in detail pane when expanding a different column in the master row.

Let's now take a look at the detail-level content we're showing when the different master-level columns are expanded. Specifically, we will look at how to share context between the detail renderers and the master-level grid.

When expanding the Sales column of a master-level row, the detail renderer shown displays a grid in pivot mode. An important detail is that we use the AG Grid context object to provide data to the detail-level renderer.

Specifically, when rendering the detail-level content, we check the AG Grid context to see if we've added any records (using the Cost detail) so we can show the most up to date information for this master-level row.

See a screenshot of the sales detail content below:

When expanding the Cost column of a master-level row, we display a pie chart showing the total cost of each product in the grid detail under sales. We use the context object here in a similar way to the Sales detail to display the latest data if a user has added a record using the Cost detail as shown below:

See a screenshot of the Cost detail presenter below:

When expanding the Orders column of a master-level row, the detail content shows a data entry form. We can use this form to add records to update the sales and cost details and the values in our master row.

The order form consists of two drop down menus, two text inputs and a button. The first drop down contains the countries listed in the sales detail, the second contains products A, B and C. The text inputs allow the user to enter the sales and the cost of this product and the button adds the record as shown below:

When we click the form button we add a new record to the grid context and update the master row values with the total cost and sales for this continent.

We hope you find this article useful when implementing multiple detail grids in an application using a master-detail grid. Please feel free to fork the example from the blog post or use any code snippets and modify them to fit your application. 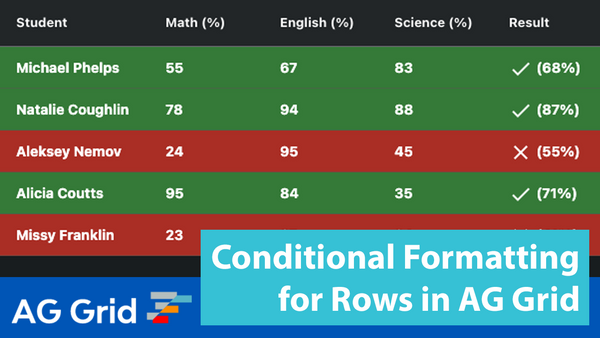 Learn how to conditionally format rows in AG Grid. We've illustrated this in a JavaScript example to help you integrate this in your projects. 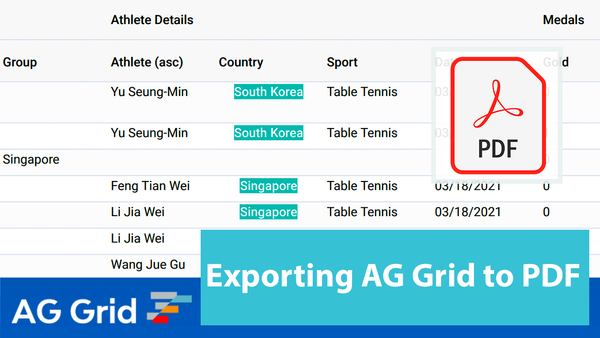 Learn how to export AG Grid to PDF using the PDF library pdfMake. Get the samples in JavaScript, React, Angular and Vue to integrate this in your projects.