The first ever version of ag-Grid was released over 6 years ago. It started as a pet project, something I wanted to do because I wanted to do it. There were no World Domination plans, no intent of an ag-Grid company.

I needed a logo, because you can’t be a serious anything without a logo right? So along came the first ag-Grid logo.

The logo looked great to me back then. I only had ag-Grid working with AngularJS (React was starting to gain traction in the community in 2015) so I robbed the Angular colours, and the hexagon shape was influenced from the AngularJS logo. ag-Grid was the grid for Angular, and the logo reflected that.

However the core of ag-Grid was never written in Angular, it was always written in plain JavaScript with zero dependencies and plugged into Angular. The ‘ag’ in ag-Grid stood for AGnostic – it didn’t believe in any framework! So in 2016 I worked on integrating the grid with React. A few years later Vue followed.

In 2016 I used money from sales to start hiring. Soon there were three of us working in the company full time from a spare bedroom in my apartment.

In 2017 we moved into an office – a room above some estate agents in the London residential suburb of Balham (that’s where our old “Balham” theme names come from). We stayed in that office for two years before moving into where we are now, renting two floors in the Bank Chambers building beside London Bridge. We currently have 26 people working full time at our London office and plan to grow more this year.

Today we have over 6,000 customers using ag-Grid Enterprise, including most of the Fortune 500, and enjoy one million downloads of our ag-Grid Community per month. The world’s top Investment Banks have standardised on ag-Grid. Generally speaking we are regarded as the Gold Standard for JavaScript DataGrids across all frameworks including Angular, React and Vue.

The pet project of 2015 has grown up into an Enterprise Company with Enterprise Customers and continues to grow. As such we thought it was time to reinvent our logo and our brand.

From now on, we shall be written as AG Grid (pronounced A – G – Grid as before), using capital letters for the “ag” and without the dash. It’s a company name, and a great one we are proud of, it’s not an HTML tag! It deserves capital letters and to be spelt like a great company name should be.

The logo we believed required updating to remove the association with Angular, which although Angular continues to be an especially important framework, the other frameworks we support are equally as important. So we needed a logo that was neutral towards any particular framework. We also required a logo that was sharp, more enterprise, less hobby project. As such, the new AG Grid logo is as follows:

From now on we are AG Grid. We are proud of who we are. We have disrupted the JavaScript datagrid space, and yet it feels like we are only just starting. We will continue to grow and do great things. We have taken over the world in our own little way, and we are ready to take it over all over again.

Thank you to everyone who has supported us so and allowed us to get this far. 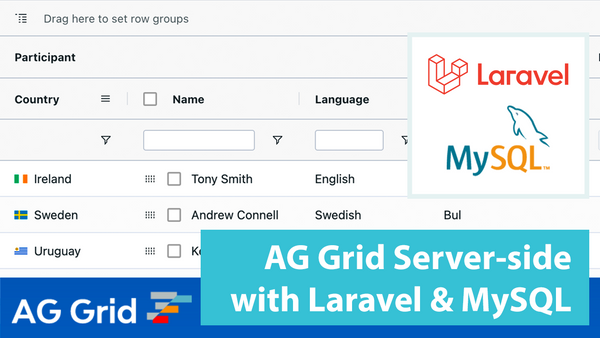 Learn how to build an Angular web application that uses the AG Grid Server-side Row Model with Laravel in the backend using a MySQL database. 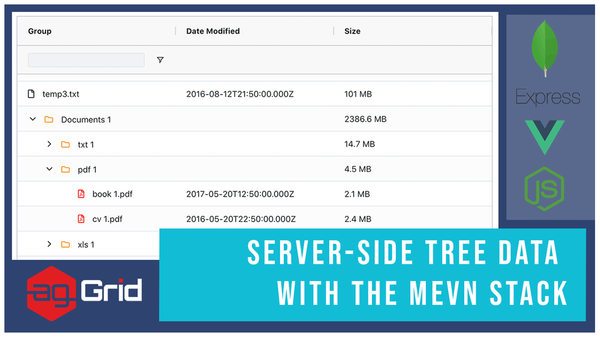 Learn how to implement server-side tree data in ag-Grid using the MEVN stack (MongoDB + Express + Vue.js + Node.js). The codebase is available for download.