In June 2022 AG Grid will be sponsoring and presenting at React Summit and JS Nation. These are back to back conferences on the 16th and 17th June.

Niall Crosby will present at React Summit conference describing the work that AG Grid performed to refactor AG Grid's previous React Wrapper to be a 100% React Client for the core grid API.

AG Grid uses a Model View Controller architecture which allows AG Grid to support multiple frameworks with the same core grid features and release multiple framework specific clients which use the core grid. This creates a native framework experience for developers, without AG Grid having to release separate data grids for each framework. It also allows developers using AG Grid to customize AG Grid with their own framework specific components e.g. write a Cell Renderer in React as a normal React component.

Sean Landsman will present an online workshop showing developers how to get started and customise AG Grid in React to demonstrate the benefits of the React Client for AG Grid.

You can find the code for Sean's workshop in Github, each stage of the workshop has a different branch and the readme for each branch explains the steps to take.

Stephen Cooper will present at JS Nation on the approach AG Grid use for generating documentation examples.

No-one particularly likes maintaining examples for documentation but most components only work with one framework so there is only one example for each feature to update. AG Grid supports 4 frameworks (React, Angular, Vue and Vanilla JS), in addition each examples is presented in JavaScript and Typescript, and further we show examples in Vue 2 and Vue 3, hooks and classes and other variations. In total each example is represented in 14 different ways. AG Grid has over a thousand examples.

How does AG Grid manage to maintain and keep updated over 14,000 different runnable code examples? Well, we don't. We only maintain a TypeScript version of each of the 1000 examples and then use automated translation routines that convert each example into the 14 variations. The translation uses a combination of AST Parsing, Code Generators, Type Stripping, Regex matching and specific code pattern specific approaches.

Stephen will be presenting a summary of the approaches used, to help other teams reduce their maintenance burden for example code.

Stephen will also present an online workshop on using AG Grid in Angular, this will help demonstrate AG Grid's fully typed API that Angular developers in particular will be able to take advantage of because they use TypeScript by default.

In addition, AG Grid will have a stand at each conference, which will be staffed by core development team members ready to demonstrate and discuss the performance benefits available to teams when they adopt AG Grid as the Data Grid in their applications... regardless of whichever framework they are using. 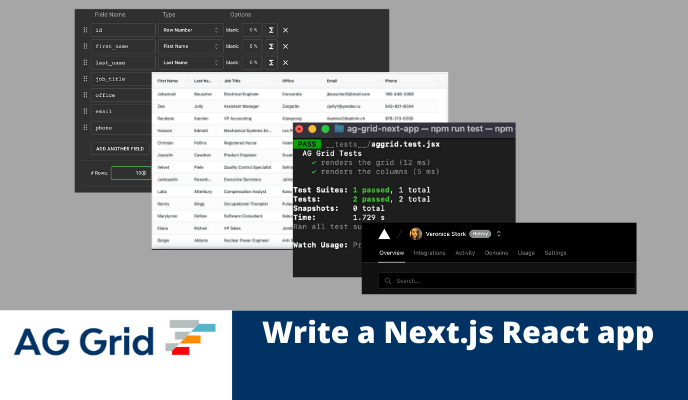 If you’ve worked with React recently, you’ve likely heard of, a popular React framework with a great developer experience. Next.js combines well with many other technologies, including AG Grid. Discover how they work together. 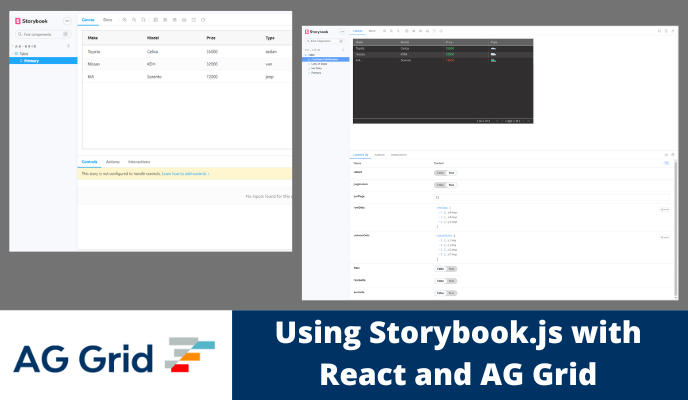 A *Storybook* consists of stories for different components that describe your component’s various states. A *story* can be considered as the atomic unit or the smallest component. You can write a story for a component with different parameters or props and see how your component behaves.